Potholes in roads are a problem.  They open the road surface to the elements, and often lead to further deterioration of the highway.  All road users hate them. They damage wheels, axles and suspension, and for cyclists and motor-cyclists they can easily lead to injury.  Some accidents are caused by vehicles hitting potholes, or swerving to avoid them.  But repairs cost money, and the highway authorities are short of funds - some estimates say that nationally, it would take another billion pounds a year to keep up to date with pothole repairs. 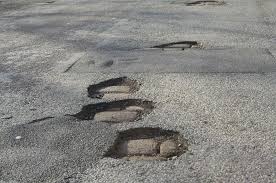 The internet has led to online forms for reporting potholes.  Here in Devon, we have an interactive map for reporting highway faults including potholes.  However, even with an app for a smartphone, only a small number of potholes will be reported to Devon County Council.  You have to be a little altruistic to report a pothole - or annoyed because it has affected your journey.  And you have to remember where the pothole was!  So, the number of potholes reported per day is comparatively small.   In addition, there is a built-in bias; it is easier to remember a pothole when you walk past it.  So potholes in built-up areas are reported, those in the open country are not so much

And this leads to an O.R. problem.  Given a reported pothole, when should it be repaired?  If you say "immediately" then it is quite likely that the repair team will have long journeys between jobs.  But if you say "wait until there are several in a small area" (so reducing the travelling) the people who make the reports will be annoyed at not seeing any action.  So the O.R. problem is twofold;  first, determining the rules for creating routes for the repair team.  O.R. has the techniques for doing this - it is just like a lot of distribution problems and vehicle routing problems.   In addition, you will need rules for collecting reported potholes from the reporting programs and assigning them to a date for action.

Quite often, here in Devon, the report leads to an inspection before the repair is carried out, and the inspector marks the pothole with paint for the repair team - and to reassure local people that action will happen.  So there's a further problem - how long to wait between inspection and repair!  Inspection adds a further dimension - the severity of the pothole.

Looking at the map of Devon today (30th October), there are well over two hundred potholes awaiting repair.  One cluster has 15 in a small radius - but close by there are areas with no potholes - along the roads leading to that locale.

How could you measure what policy would  be best?  Cost of travel is obvious, with constraints on the maximum delay between report and repair.  But a good policy might need regular revision, and that would also carry a cost.

I shall continue to be altruistic, and add to the number of reported potholes.